As an experiment, the developer decided to release a cracked version of Game Dev Tycoon onto torrent sites along with the genuine version, pre-empting piracy. “The cracked version is nearly identical to the real thing except for one detail,” explains Greenheart on its website. “Initially we thought about telling them their copy is an illegal copy, but instead we didn’t want to pass up the unique opportunity of holding a mirror in front of them and showing them what piracy can do to game developers.” After a few hours of building up your virtual game studio, this message appears: 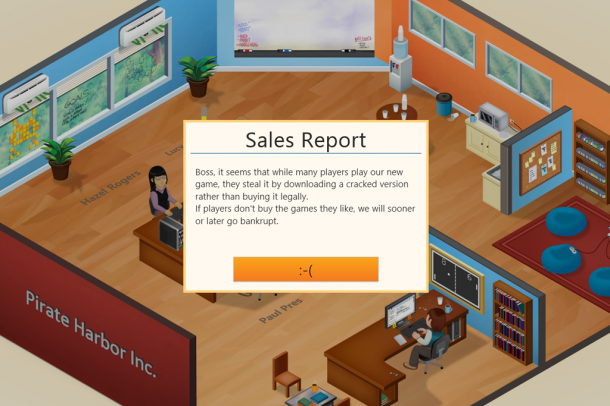 The Best Anti-Piracy Measure Ever – IGN.

What a great idea. Sadly, media has the greatest effect confirming already held beliefs and the least effect in changing them (source: Henry Jenkins III).

Or maybe… people are just getting thicker:

“You can stand tall without standing on someone. You can be a victor without having victims.”
by Harriet Woods